The three cities on Waterfront in Japan 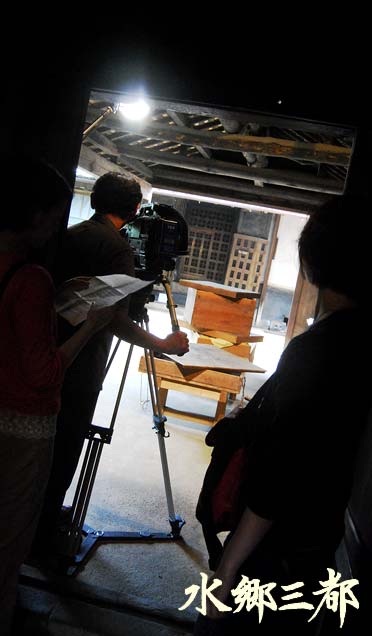 Feel refined every time you walk.

Walking through the traditional streets full of charming taste, you can touch the remains of the long history and the townspeople's spirit that has been long inherited. 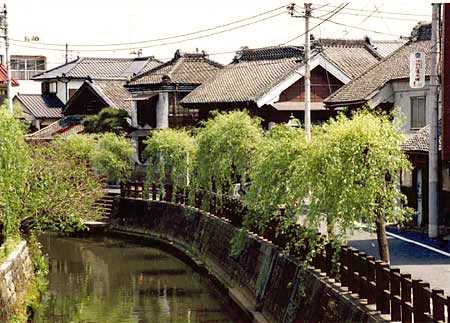 The best strolling spot along the Ono-gawa, lined with the scenes designated as the important traditional structures reservation district.

The city center preserves the state of Edo period when this village was prosperous in a trade of the transportation by water.

Some of the shops and warehouses of those days are still in business. A few steps into the lanes will lead curious visitors into some nostalgic shops and scenes.

The townspeople’s vitality helps revive the shopping district at the town center around the Chukei Bridge.

There are successive openings of some new restaurants wisely restored to the original style and others designed to adjust to the traditional townscape. 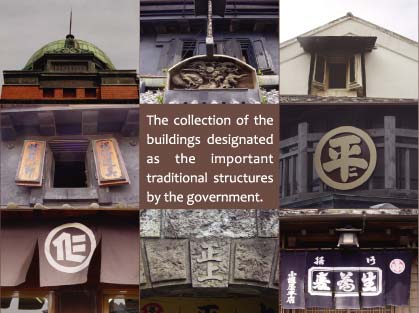 These are great deeds of Ino Tadataka 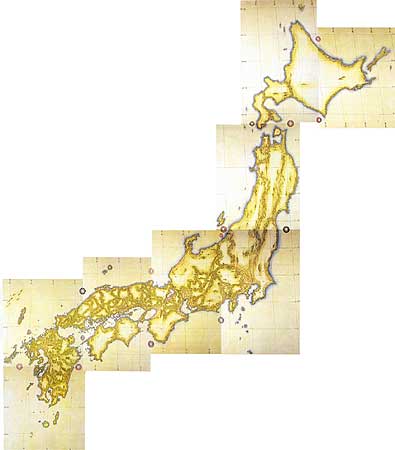 Ino Tadataka succeeded in making accurate maps of Japan in Edo era when there was no modern hi-tech machine of measurement to help him make a survey of land. However, the map he completed was just as accurate as the one made by the modern technology.

He ran a brewery of "sake" and dealt in many other goods such as charcoal, rice, oil and the like. Besides, he gave a helping hand to the needy.

At the age of 49, he transferred the headship of the family to his son, Tadanori, and went up to Edo (now Tokyo) to study astronomy and surveying.

At 55, he started on his first trip from Edo to the south of Hokkaido (then Ezo) with several followers of his. At 71 he finally ended his trip of surveying all over Japan.

What he achieved 200 years ago was truly amazing, but his power of determined will to walk across the whole Japan deserves high praise.

Many materials about his achievements are on display. 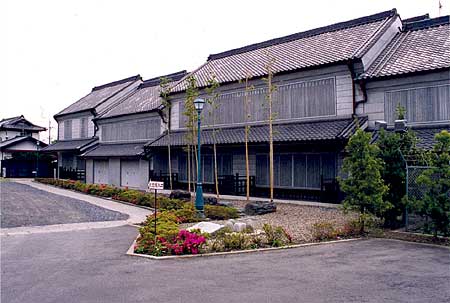 The old residence of Ino Tadataka Tadataka lived in this residence for about 30years.

The shop-front faces the street along the Ono River.

The main residential part was designed by Tadataka himself. 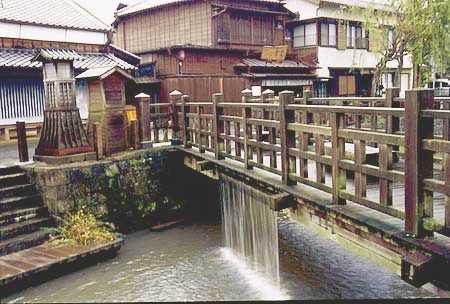 This bridge over the Ono-gawa is originally a waterway which used to carry water from the eastern side of the village to the western side. It is now called “Jaa-Jaa-Bashi,” which has been restored as a bridge. The sound of the falling water from the bridge is also selected among the best 100 sounds of Japan.

You may be a movie star against the background of traditional townscape in Sawara.

The film "Unagi (the eel)," which was awarded the Grand Prize at the Cannes International Film Festival in 1997, was shot in Sawara. The reedy fields around the marshes in northern Sawara provided the best shooting location for this world-best film. When you stroll along the Ono River, you can recognize some of the scenes from the movies, CM films and TV dramas you have ever seen.

Sawara is situated within 100 km zone of Tokyo, but a lot of natural scenes on the waterfront and rows of traditional townscape called "Ko-Edo" are well-preserved. Painters are likely to visit Sawara and paint the scenery against the natural and traditional landscape.

After the tour through Sawara, you will see some memorable scenes on the TV screen at home or movie screen at the theatre.

The sailing along the waters in Itako Some warehouses remind us of the prosperous past of the town.

Itako used to see the better days as the place of pleasure and have a great allure for a lot of celebrities. So, many popular songs which featured local attractions associated with this town have been composed.

Riding a boat down the Mae-kawa may make you feel as if you were in a happy mood of listening to one of those songs played or sung somewhere. 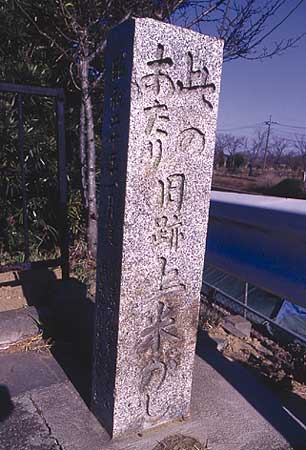 Several stone monuments on the river banks show that the rivers in Itako were used as the necessary routes of transportation in trade.

The approach to Kashima shrine The approach to the shrine on a festive day filled with the street stalls.

The shrine is the most authoritative one in Ibaraki Prefecture (once Hitachi Province).

The pavement to the main building is kept in good condition fitted to the landscape, and the statue of a deer (the symbolic creature of the shrine) offers the added attraction to the visitors.

The precincts during the period of traditional festivals in spring and fall and several weeks of the New Year are exceptionally crowded with people. 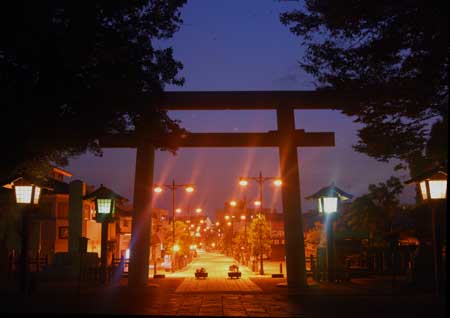 The statue of Tsukahara Bokuden and his grave 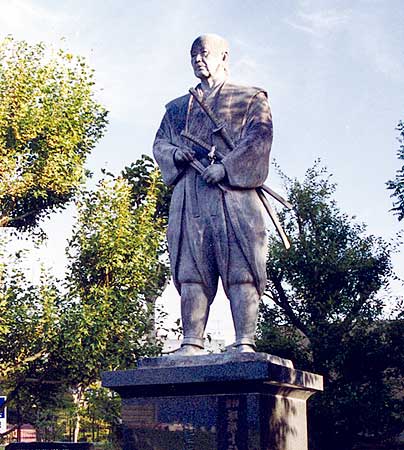 Bokuden was born in Kashima. One of the most popular story about him was that he offended himself with a pan lid against a wooden sword swung down by Miyamoto Musashi. Kashima-shinto-ryu, which has inherited "the spirit of Bokuden's swordsmanship," is a very practical Ken-jutsu and once a year its open performance is demonstrated on the National Martial Arts Day held in the precincts of Kashima Jingu on the second Sunday in June. The team is always unrivalled, so lots of supporters regularly visit the club house, watch an open drill and check every move the players make.

Let's have a merry talk with these energetic supporters. Visit the stadium and you can do the shopping at the club house shop and eat at "Shika-Garden." 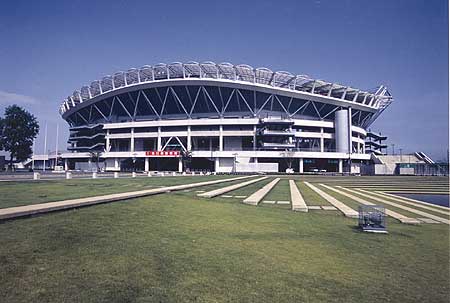 The soccer museum in the Stadium allows guests to watch the 2002 World Cup memorials and an interesting exhibition of a good many Kashima Antlers' feats.

The supporters of the Kashima Antlers The private group called "The In-fight" supports the invincible Antlers at the Kashima Soccer Stadium. Their earthshaking, enthusiastic cheers can always lead the team to its successive victory.

Why don't you experience a storm of excitement in the studium? They are the people who give a hand when the official soccer game is held.

The group, which has a public reputation as a good model of volunteer activity, gives a warm welcome to every guest on the day of the official game.

So many sake breweries, so many tastes

Tasty "sake" made from the pure water in Suigo

The Suigo area produces rice and water of high quality. In this area there are several breweries of "sake" which create a variety of flavors, such as dry, tasty, sweetish, light and mild.

Why don't you visit some breweries and try to taste "sake" ? 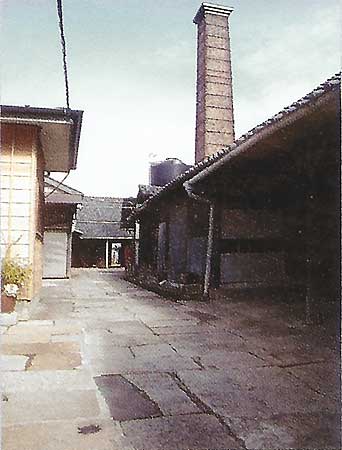